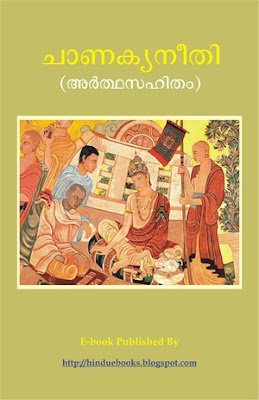 Complete text and translation of "Chanakya Niti" in Malayalam. This book contains nearly 340 verses on Niti (right conduct) in 17 chapters. Chanakya was an adviser and a prime minister to the first Maurya Emperor Chandragupta, and was the chief architect of his rise to power. Kautilya and Vishnugupta, the names by which the ancient Indian political treatise called the Arthaśāstra identifies its author, are traditionally identified with Chanakya.

Though most of these verses deal with Raja Niti, i.e. how a king should deal with his duty of ruling the kingdom, this book is also useful to common man as Chanakya instructs how a man should conduct is various life situations.