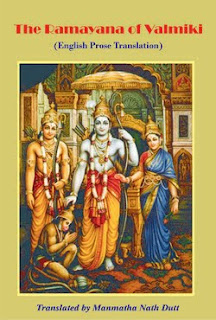 The Ramayana is certainly one of the world's oldest legends. Modern scholars claim that it was first composed around 300 BC. The devout Hindu believes that Rama lived many hundred millennia ago, in the treta yuga, and that was also when Valmiki first told his immortal story. The epic is called the Adi Kavya, the world's first poem. The God Brahma himself is meant to have inspired Valmiki to create his classic, in twenty-four thousand slokas. The true purpose of the Ramayana is to awaken its reader spiritually, and to send him forth on the great journey that leads to Moksha, to God.